ThumbStopper® is a solution for brands to amplify their content through their retailers’ social media and search destinations at the local level. Their service and proprietary technology enables users to optimize and amplify existing organic content by distributing it to retailers’ social & search presence on the largest digital platforms in the world.

ThumbStopper helps connect and amplify brands’ organic content to their independent retailers around the globe.

ThumbStopper, a growth-stage SaaS company in the Martech space had stagnated in new logo growth and did not have a plan in place to grow at the pace the founder wanted to go. The team knew there must be an optimal path toward market growth, but did not know how to get there.

The Founder (a serial entrepreneur and visionary) had a multitude of strategic pursuits, which fractured and fragmented this already-lean organization.

Sales and marketing were at a crossroads. The leaders of those respective organizations did not work in tandem. The organization needed to optimize the revenue function of the business. Overspending and lack of oversight on the marketing side combined with a loosely defined sales process and inconsistent custom pricing were some of the largest day-to-day roadblocks the organization wrestled with.

A trusted advisor referred ThumbStopper to Orchid Black when its Founder was contemplating the idea of bringing on a Chief Revenue Officer (CRO) to help solve these problems.

Orchid Black quickly noticed that while a CRO was likely a useful guide on the journey that was about to be undertaken, it was not the only change necessary to make it a success. And thus began the Value Creation Assessment (VCA) that changed ThumbStopper’s trajectory.

Thumbstopper was not the founder nor the team’s first rodeo. This group had been working together for 10+ years on three separate companies, with one exit in the previous six months. The reason for the exit? They were focusing and going all-in on what they believed was their biggest opportunity yet: ThumbStopper’s journey to Mars—trying to beat Elon there by 2024!

Similar to Orchid Black’s objective to multiply the value of the companies it partners with, ThumbStopper’s goal is to amplify the organic reach of the brands they work with.

With fast-growing (and heavily funded) competitors in the market, ThumbStopper knew that now was the time to act. The window was closing and there was about to be a land grab. The VCA identified the following initiatives that needed to be completed in the near future to position the company for long-term success:

‍"﻿﻿ThumbStopper was a fast-growing business and, like many others, ran into scaling issues across departments. While we had market validation, it was apparent I needed help scaling the company in a predictable way.”

Orchid Black’s proven and repeated success at positioning partner-clients for growth is not an easy process to go through, but it is fruitful. The ThumbStopper team was up for the challenge. The first thing (as should be the case for all companies) was to build out the strategic and operational plan:

ThumbStopper’s “aha moment” came from its 3-year plan, which was the first strategic initiative coming out of the VCA. This process was an inflection point for the company. While the culture was strong, ThumbStopper leadership had never undertaken an initiative like this as a solidified team. This wasn’t easy. There was a lot of blood, sweat and tears (Okay, maybe no blood…), but it ended up as the team’s “moment.”

They came together to build out the plan, looking to begin execution over the back half of 2021. Today, the team has established a monthly cadence, reporting on the progress of their Strategic Methods (explained as part of a Strategic & Operational planning process) the team is working through resulting in a transparency across the business.

As the 3-year plan was being finalized, Orchid Black further identified that the existing ThumbStopper leadership team did not have the process, tools, or technology to implement the organizational changes and improvements needed.

“This foundation [of predictable growth] comes from Orchid Black. Imagine you’re getting your masters degree or MBA on demand [in building a business]…we’re not a scalable engine yet. This is going to allow us to become scalable.”

So what happened next? Simple in hindsight, but not at all easy in the moment.

Improving fundamental organizational design structures within ThumbStopper was the first thing that needed to change. None more noteworthy than the reorganization of the revenue team, formerly the uncooperative sales and marketing functions.

Michelle Westich (OB Operating Partner and expert in growth strategy, talent management, and operational efficiency) parachuted in to provide assistance and became the interim VP of Marketing. This was to ensure buildout of the Business Development program, elimination of the excessive marketing spend, and a refocus on the marketing strategy transition from solely inbound to targeted outbound/sales enablement.

Beyond that, the sales organization had formerly been a group of 6 “jack-of-all-trades Account Executives” (AE) that took people through an end-to-end sales process.

Now? Orchid Black architected and implemented a new sales model that is now functioning with 4 full-time BDRs, 1 player-coach BDR Lead, and 3 Account Executives. Following this transformation, it was time for the OB Fractional CRO to exit the picture. Throw in a Sales Operations specialist and this team was ready to fly!

This entire process found almost $500K in annual marketing spend efficiency while increasing MQLs, stabilizing the website and resulting in revamped brand messaging. Resident growth expert Michelle Westich transitioned to a ThumbStopper employee as Chief Operating Office (COO), where she expanded responsibilities beyond revenue to include customer success. Additionally, Westich was able to promote a VP Revenue from within that would not have been possible prior to ThumbStopper’s reorganization efforts. With Westich now as COO, Orchid Black was able to employ a former AE who had excelled in the end-to-end role as new “Head of Revenue;” no one could have been better suited to the task.

Yet, there was still work to be done. One of the biggest pain points for the team (from sales > customer success > finance/operations) was the laissez-faire approach to pricing and billing. The team collectively embarked on another high-impact project. This one involved a revamp of their pricing and packaging that touched on the following areas:

Orchid Black’s VCA was the first domino in a wave of movement that has reset ThumbStopper on a journey that has positioned them for aggressive growth over the next 3 years. 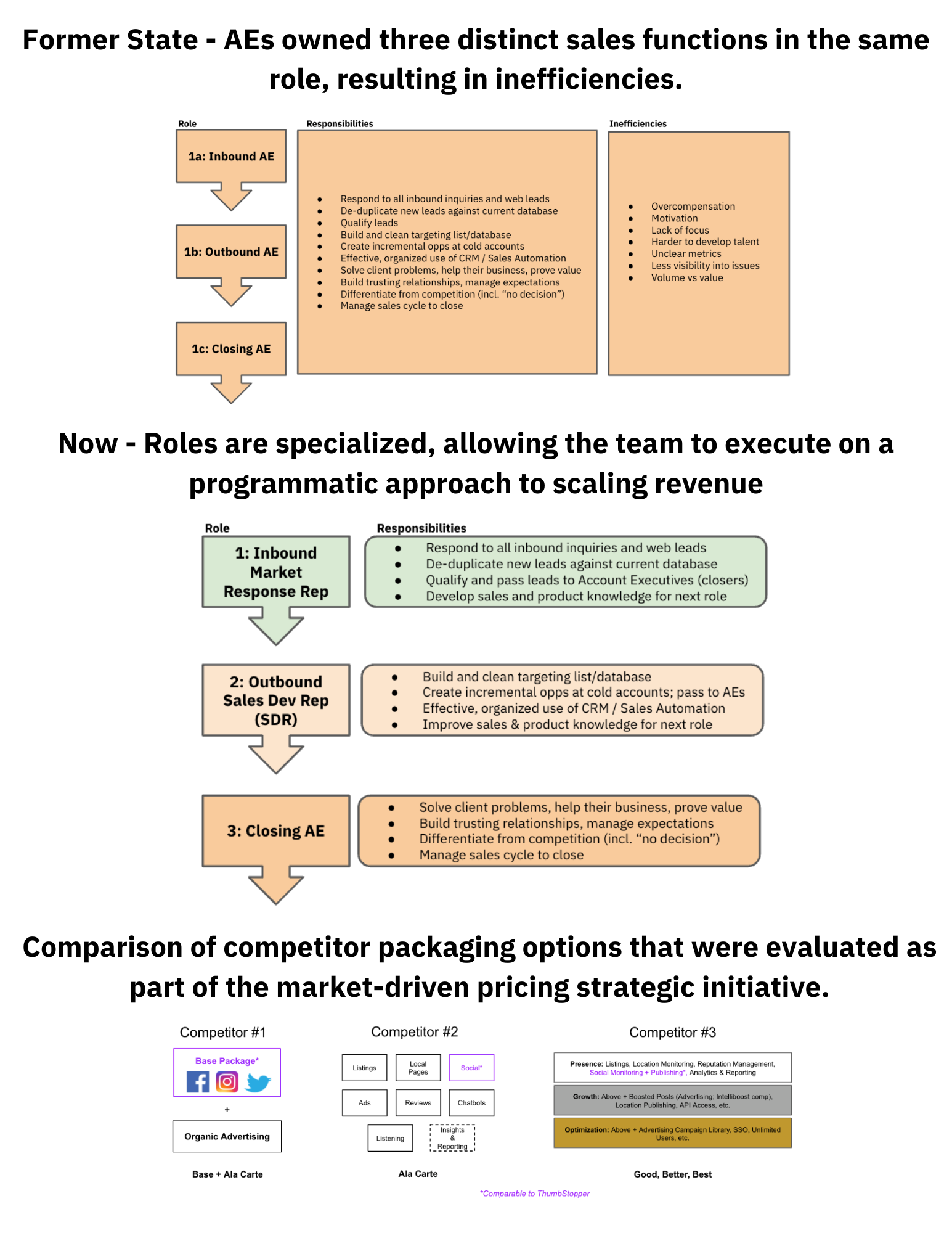 Orchid Black used its expansive experience in architecting and implementing growth strategies to propel ThumbStopper on the growth trajectory that it’s now on. Orchid Black’s Growth Services offering was developed specifically to provide the team with tools and knowledge that would accelerate value for growth-stage technology companies like ThumbStopper.

“Orchid Black quickly diagnosed our company through a Value Creation Assessment (VCA) and designed a growth program. This program has ThumbStopper scaling revenue in a predictable manner, allowing teams to manage with data and processes. These process foundations have put us on a path to higher growth and a much larger valuation towards an exit. In a few months, we saw ~30% revenue growth, and I have confidence this will continue to multiply. I highly recommend that all tech founders who are looking to scale effectively, take a hard look at OB."
- Matt Brown, CEO & Founder

“
The opportunity in front of ThumbStopper was easy to see. When I was brought in I knew the work that needed to be done. The Value Creation Assessment and subsequent Strategic Planning process identified high impact, high value strike points.. We simply needed to roll up our sleeves and get to work reimagining the organization, architecting and implementing new business practices. A critical success factor has been winning the hearts and minds of the people and having them hyper engaged in co-authoring change.
”
- Michelle Westich, Orchid Black Operating Partner turned ThumbStopper COO